The Difference Between CBD & CBG: Why They Are Both Crucial To Your Body 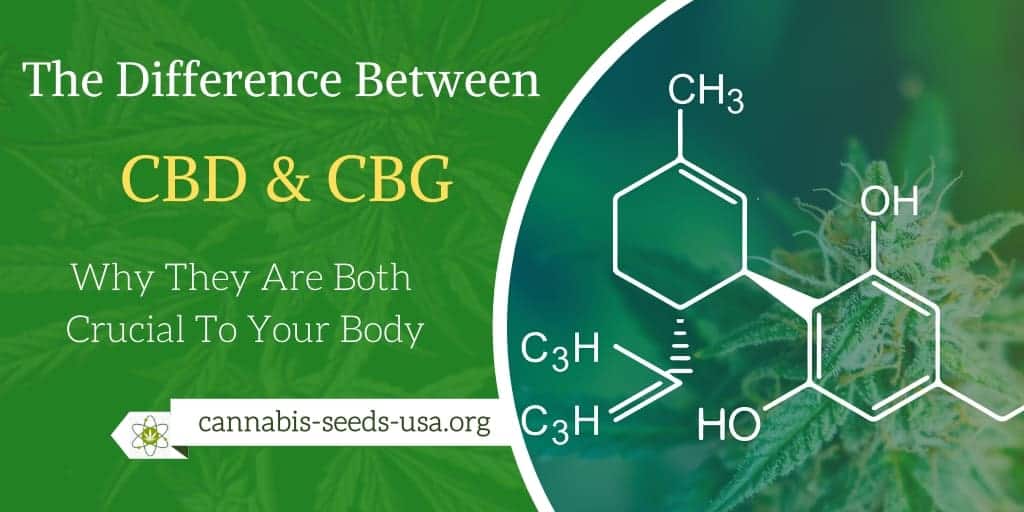 On the cusp of the legalization of hemp through the government mandated Farm Bill of 2018, more and more people are understanding the benefits of the ingredients in the hemp plant. One of the most popular compounds in this plant you probably already know. That compound is CBD, or cannabidiol.

CBD is turning heads on a lot of industries including the health and wellness niche and beginning to also be used in the beauty industry as well.

The hemp plant contains several hundred cannabinoids along with CBD which have proven beneficial to the user who experiences these products. In this health-crazed world we live in, the ingredients in the hemp plant has proven to be one of the fastest growing trends in America. People from all walks of life are learning more about how these compounds can help them achieve various wellness goals, reduce pain, and even balance mentality. This article will explain why two compounds in the hemp plant (CBD and CBG) are crucial to your body and why more people should be considering the options they can deliver.

One of the most popular ingredients found in the hemp plant is CBD. By now, most people have heard of various CBD hemp products and the smart consumer is doing what they can to learn more about how it interacts within the body.

One of the most important features of this compound is how it directly affects the endocannabinoid system by attaching itself to the human CB1 and CB2 receptors. Once attached, a very important process begins to occur in a molecule within the human body called anandamide.

Anandamide is a direct result of CBD creating an intimate dance within the body in what scientists call the bliss or joy molecule. In fact, this study suggests that CBD enhances the joy molecule anandamide and even alleviates symptoms from harsh mental conditions like schizophrenia.

CBD holds an entire host of benefits that are crucial for balance, stability, and homeostasis within your body and your life.

Dr. Rahul Khare explains that because CBD directly attaches itself to the body’s CB receptors in the nervous system, it becomes responsible for a plethora of characteristics that appear useful for the user. Features like pain, sensation, mood, memory are all positively affected as a result of CBD interacting within the endocannabinoid system.

According to this study, CBD has also been known to bind to the serotonin 1A receptor in the brain which has been said to alleviate stress and anxiety as well.

It is very important to research and purchase CBD from reputable vendors who care about their products just as much as their customers. This process is just as important as experiencing CBD within your body and products like Kats Botanicals hemp oil, which are lab tested and customer tested will share the best results for anyone who is wanting to deliver CBD into their body.

It’s a sure bet that most people have an understanding of THC (tetrahydrocannabinol) and what it does. Since the popularity of CBD in America, more and more people know about CBD, or at least have a slight understanding of where it comes from.

One of the lesser known compounds of the hemp plant is CBG, also known as cannabigerol. Sadly, CBG is not as prevalent in most strains of plants as some of the other cannabinoids you might have heard of. This compound presents itself as less than one percent in most cannabis plants, however, big things come in small packages and it is very important to learn more about CBG and why it is crucial to the body.

Since it presents itself in less than one percent of these plants, it isn’t considered a major cannabinoid. However, in order to get more CBG, scientists are breeding plants to manipulate them to create more CBG when harvested because of the effects it has on the body.

CBG is important because of the role it plays within the human endocannabinoid system. Scientists have learned that CBG directly interacts with major physiological systems and various problems in the body. Because of this relationship, CBG has been known to be effective in treating symptoms glaucoma as well.

CBG is more than just a tag-along cannabinoid found in the hemp plant and scientific breeders are doing what they can to enlarge the production of CBG within the hemp plant so the consumer can benefit more from this compound.

Is CBD Right For You?

There is no doubt that CBD is one of the fastest growing industries in America today. CBD and CBG are two very important cannabinoids that your body needs to provide homeostasis and balance to your mind, body, and life.

CBD and CBG have both been positive ingredients which have pushed the hemp plant to the top of the industry, and more people are deep diving into all of the cannabinoids that are found in the hemp plant to get a better understanding of how the full spectrum effect can benefit them. CBD is right for you if you want to provide your body and life with mother nature’s purest form of health and wellness.