White Widow brings you a powerful burst of energy and euphoria that kicks in immediately. These cannabis seeds grow into crystalized buds full of resin. With 60% indica and 40% sativa, this strain will you feeling conversational and creative. This indica-dominant hybrid is very popular in the world-famous Amsterdam coffee-house world.

White Widow brings you a powerful burst of energy and euphoria that kicks in immediately. These cannabis seeds grow into crystalized buds full of resin. With 60% indica and 40% sativa, this strain will you feeling conversational and creative. This indica-dominant hybrid is very popular in the world-famous Amsterdam coffee-house world.

White Widow delivers a strong head high that’s steady and cerebral. It allows you to relax while enjoying a vivid, mental buzz brought on by its average high 19% THC contents (though it’s been measured up to 25%). With 0.20% CBD contents, it’s a highly-regarded medical marijuana strain with some very effective medicinal properties.

Cannabis cultivators love the uncomplicated characteristics of White Widow. These feminized seeds grow into compact plants with very high yields. Plants grow to be about 2 ½ to 4 feet tall and are ready for harvest in about 60 days (8 ½ weeks). 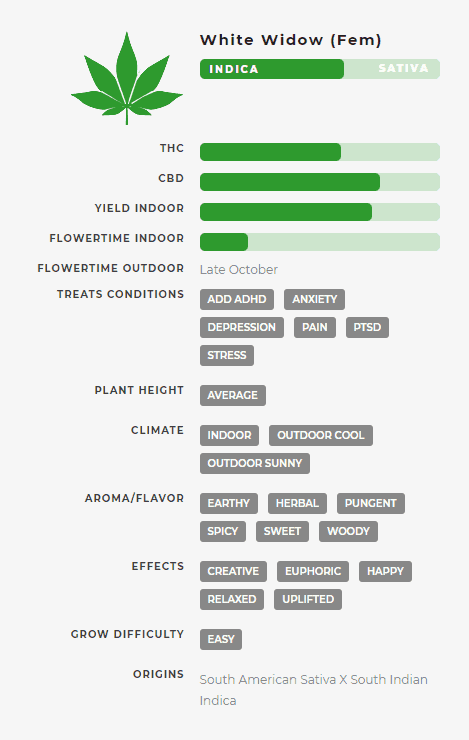 White Widow seeds grow best in controlled indoor settings. But, this strain also flourishes outdoors in warm, sunny climates. When it comes to diseases, this plant is fairly resistant. Marijuana growers love its ability to adapt well in climates that are a bit colder as well. So, it’s a good strain for beginner growers.

These plants are very compact, with heights no more than 4 feet tall. When growing White Widow cannabis indoors, these medium height plants will yield up to 18 ounces of usable marijuana per square meter. Plants will be completely flowered within 8-9 weeks.

Growing this feminized strain outdoors will bring you a higher yield of up to 21 ounces of usable cannabis per plant. Harvesting will take place toward the end of October.

This is a great strain for first-time growers and those who use Sea of Green (SOG) and Screen of Green (ScrOG) cultivation methods.

The White Widow strain is a hybrid. It was bred in the Netherlands in the 1990s, becoming one of Europe’s first cannabis imports. Some say this strain is a cross between South American sativa and South Indian indica.

Others give credit to parent strains South Indian indica and Brazilian sativa landrace. To this day, the actual origins of this strain remain controversial.

Either way, this strain has become a leader in the medical cannabis world. Its genetics has helped to create other legendary strains, such as Blue Widow, White Rhino, and White Russian.

This balanced hybrid is a favorite among growers, which takes about days to completely flower indoors.

Today, White Widow is one of the top sellers in Dutch coffee shops. It became a very prevalent strain on the cannabis market thanks to the Weeds Showtime TV show which made references to it. This strain is also very popular in the rap music industry.

If you’re looking for a smooth, pleasant high, White Widow is the strain for you. It delivers a euphoria that’s both uplifting and relaxing, guaranteeing you a “good time” high.

This strain inspires you and brings out your creative side. You’ll find yourself in a euphoric state of consciousness that’s invigorating and leaves you with an open mind.

The White Widow cannabis strain is very potent. It brings you a powerful buzz, yet you’re left feeling energetic and sociable. This social high won’t leave you feeling physically sluggish, so there’s no heavy couch-lock involved. Since there’s no extreme heavy feeling, this is the perfect strain for daytime users and those with busy lives.

This hybrid strain is well-engineered to relax you, without weighing you down. The hype behind White Widow marijuana is well-deserved. It’s gained global popularity for its intense high that leaves you energetic enough to accomplish your goals throughout the day. It delivers a high that’s cognitive driven, along with a relaxing undertone.

Don’t let the sugary sweet smoke of White Widow fool you. It may start out pretty light. But, when it expands, it does it dramatically, leading to very heaving coughing. This is especially true for first time or occasional smokers.

White Widow is a strain of marijuana that comes with very gentle adverse reactions. Some of the most common side effects include dry eyes, dry mouth (also known as cotton mouth) and dehydration, which is combatted by drinking lots of liquids while smoking this bud.

Some users of White Widow have also noted feelings of nervousness and mild paranoia. There have also been reports of dizziness and headaches. But, these are very rare instances, and usually related to users consuming more of this powerful strain than they can handle.

As a medical cannabis strain, White Widow is an effective treatment source for many ailments and chronic conditions. Medical marijuana patients use this strain to effectively treat symptoms related to:

White Widow has been recommended by physicians and medical cannabis dispensaries for those who struggle with the stresses of everyday life. After a long, hard day, this strain will help you come down and relax. It contains properties that stimulate you mentally, making it a useful strain for treating fatigue.

For medical marijuana users, this strain of cannabis will help you relax and unwind. Yet, you’ll maintain your usual sense of mental awareness.

The White Widow strain of marijuana was named after the crystals that cover its flowers. So, it resembles buds dipped in sugar, which you also smell traces of when this strain is smoked. Its fragrance is strong and pungent, with spicy, earthy undertones. Some even say it comes with a peppery, citrus scent as well.

White Widow, much like its aroma, brings you earthy flavors. It’s a sweet smoke that leaves a slightly sugary flavor in your mouth. Prepare yourself for an interesting mix of flavors, with hints of wood, pine, and tangy, fruity sweetness, with a lemony aftertaste.

Be the first to review “White Widow (fem)” Cancel reply