Trainwreck is a feminized hybrid with sativa effects so potent they hit you like a freight train. This staple from Northern California brings you a piney, spicy aroma, mixed with the smell of sweet lemon. Featuring a high CBD level and 21% THC, this strain gives you a euphoric high that taps into the happiness and creativity in you.

Trainwreck, a feminized hybrid that has sativa effects so powerful they feel like a freight train, is called Trainwreck. You will enjoy a sweet, spicy, piney aroma from this staple strain from Northern California. This strain has a high CBD and 21% THC levels, which gives you a happy high that can tap into your creativity and happiness.

You can grow trainwreck both indoors and outdoors. Outdoor growers should expect to harvest in the middle of October or early November. Indoor growers will see flowers in 8 weeks. This strain is ideal for home and commercial growers. It has thick stalks and strong roots. 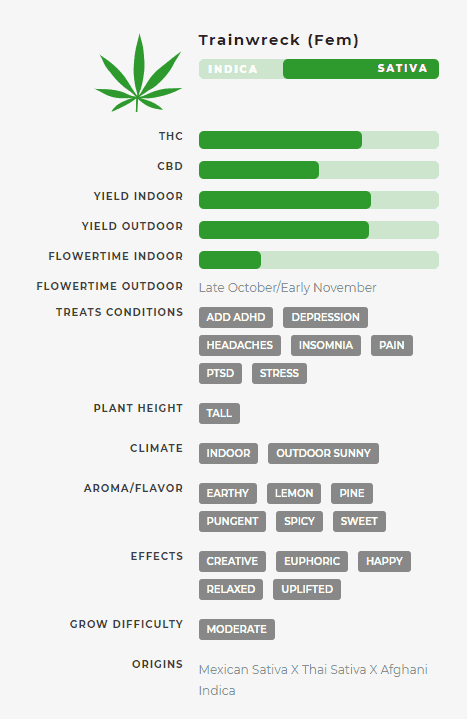 Trainwreck is a favourite for home and commercial growers. It can be grown both indoors and outdoors because it is so versatile. Trainwreck seedlings can grow to thick, multi-stemmed plants that can reach almost 7 feet in height.

They don’t need a lot of care.

To prevent them from growing too far, it is important to keep the stems trimmed. Trainwreck’s resin is very prominent, as you can see on the flower buds.

Indoor Trainwreck growers can expect to see their flowering times increase in a matter of weeks, around 8-10 weeks. Because you have complete control over the environment, indoor growing is the easiest way to grow the strain.

Trainwreck should not be grown outdoors if it is to survive frost.

Outdoor growers need to plant cannabis seeds at the right time of year. They can expect to harvest between early October and late November.

It takes more time and skill to cultivate Trainwreck outside. This grower can expect to harvest 25 ounces of cannabis per plant.

The origin story of the Trainwreck strain is a legend. The name Trainwreck is believed to be a result of cannabis growers in California, who had to remove their crops in the 70s.

According to the story, there had been a train accident in the area. To avoid being caught with marijuana, growers had to move their marijuana plants.

The truth is that Trainwreck is an amalgamation of Thai sativas, Mexican sativas and Afghani indicas. This hybrid is sativa-dominant with heavy indica.

Trainwreck cannabis strain contains 35% indica, and 65% sativa. The Trainwreck strain instantly sends users on a high-speed rollercoaster ride that is cerebral, happy, and euphoric. Experts in marijuana consider it a powerful mind-bender. It can bring about major joy and inspiration. It also helps to relax and gives you a warm fuzzy feeling inside.

Trainwreck is a cannabis strain that inspires creativity. The strain’s high levels of THC give it some serious effects. It only takes a few drops to get high with this strain. Even experienced users should be cautious when consuming this strain.

Some negative psychological effects of Trainwreck are minor. Some users reported feeling anxious or paranoid. It is possible to feel confused or anxious, but this is usually temporary.

Medical cannabis patients love the Trainwreck strain. This strain is very effective for chronic pain sufferers. It is also a strong relaxant so it can be used to relieve pain conditions such as muscle spasms.

Patients have stated that it is as effective as, or even more effective than, standard prescription painkillers. It doesn’t have as many side effects.

Trainwreck can also help patients with mental health problems, such as chronic, debilitating stress. Patients suffering from depression or post-traumatic stress disorder (PTSD) are often recommended to trainwreck by their doctors.

Trainwreck is one of the marijuana strains that can treat side effects from severe medical treatments. People who have had chemotherapy, radiation or any other type of chemical treatment may experience loss of appetite or chronic nausea. They deal with the side effects of treatment, such as headaches, pains, and migraines. These problems can be effectively treated with Trainwreck.

These are just a few of the chronic, debilitating conditions Trainwreck can effectively treat:

Trainwreck is known for its dank, wet texture. The strong aroma of Trainwreck will fill any room with pine and cedar-scented forest scents. It has a mix of sweet and spicy undertones. This is a distinctive fragrance.

This indica-dominant sativa hybrid has some strong indica qualities. This strain is great for getting a clear and enjoyable mental high. It leaves users feeling physically, psychologically, and emotionally relaxed. Experts claim Trainwreck provides one of the most stimulating highs. It leaves users feeling euphoric and like everything is okay. It is a stress relief tool.

Be the first to review “Trainwreck (fem)” Cancel reply