Sour Diesel is considered a “Top Cash Crop” by experts. This extra-dank weed breed delivers an energetic, psychedelic high. Also known by the name “Sour D,” this world-famous strain has a presence that’s really strong and reeks of fuel. You’re left ready to tackle your accomplishments, instead of feeling “couch lock,” allowing you to have a good time filled with good vibrations.

Sour Diesel is considered a “Top Cash Crop” by experts. This extra-dank weed breed delivers an energetic, psychedelic high. Also known by the name “Sour D,” this world-famous strain has a presence that’s really strong and reeks of fuel. You’re left ready to tackle your accomplishments, instead of feeling “couch lock,” allowing you to have a good time filled with good vibrations.

This sativa-dominant cannabis is mixed with 60% sativa and 40% indica. It’s fast-acting and delivers cerebral effects that leave you feeling dreamy and energized. As a medical cannabis strain, it offers some very effective medicinal qualities. Consumers use it to help combat and get long-lasting relief from depression, pain, stress and other ailments.

Sour Diesel seeds grow into tall plants with 20% THC and 0.20% CBD contents. These plants grow best in sunny, warm climates. They are prone to powdery mildew, so experts place their growth level at hard. But, with the right growing techniques, these plants can flourish both indoors and outdoors. This feminized strain of cannabis was named after its aroma, which smells of diesel fuel, and tastes of tropical fruitiness. 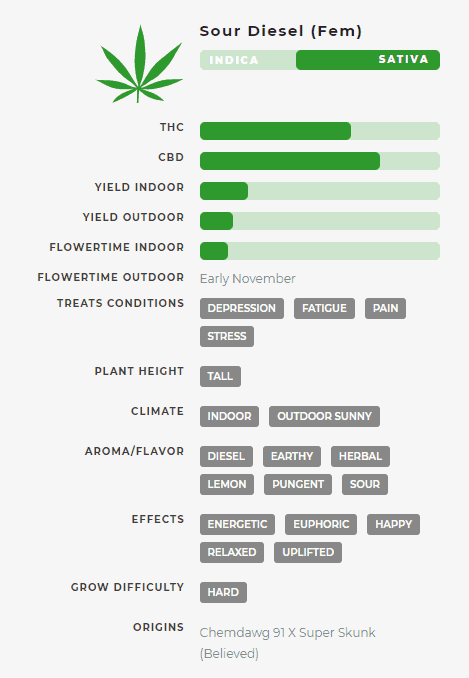 This strain is highly susceptible to powdery mildew, so, the growing environment must be kept very sterile and clean.

Because of this, it may be easier to grow indoors in order to control the environment better.

When grown indoors, Sour Diesel are simple to keep compact.

These plants will yield about 18 ounces of usable cannabis per square meter. It takes about 9-10 weeks for flowering if you choose an indoor growing method.

Outdoor cultivators should expect to yield a generous amount of about 25 ounces of usable marijuana per plant. These plants will be flowered and ready for harvest sometime in early November.

Commonly referred to as Sour D, this cannabis strain is thought to be a descendant of parent strains Super Skunk and Chemdawg 91.

It was created in sunny California in the 1990s, but not much else is known about Sour Diesel’s origins.

The mystery of its roots adds a mystical appeal to the strain. What we do know is that it’s considered to be one of the best genetics of hybrids on the marijuana market today.

Sour Diesel is a very popular strain among recreational users looking for boosts in the moods and energy levels. You’ll experience a strong sense of blatant euphoria.

This cannabis acts as the perfect prescription-drug-free “upper” and mood booster. As a sativa-dominant strain, it’s indica effects are barely noticeable. Its uplifting qualities give consumers cerebral experiences.

Ready to tickle your own psychedelic senses? Then, Sour Diesel should be your marijuana strain of choice. It’s high is quick-acting and long-lasting, which you’ll still feel up to five hours later. This strain will never leave you feeling paranoid, like typical sativas. Prepare to find yourself feeling outgoing, sociable and very talkative.

There are very few adverse reactions to using Sour Diesel. Most people report bouts of dry mouth, also known as cotton mouth. Consuming a lot of liquids while smoking this weed will help combat dehydration, which is also responsible for the dry eye sensation that some users suffer.

Another side effect of this cannabis strain, although very rare, is paranoia. This often comes from consuming too much of this powerful strain. Some users have been known to suffer from anxiety and dizzy spells, especially when they’re not used to smoking sativa.

We must note that Sour Diesel’s high is so upbeat, some find it hard to handle. The mix between uplifting and relaxing can be a bit confusing, which some mistake for nervousness.

Sour Diesel is a popular strain of medical marijuana because of its longevity. Medical cannabis patients use it to successfully treat chronic, debilitating pain. It delivers an awesome euphoria but doesn’t cause heaviness. So, it’s a very effective way to find long-lasting relief, that lasts for hours, during the day.

The Sour Diesel medical cannabis strain causes major bouts of the munchies. This gives relief to those suffering from nausea and loss of appetite, allowing them to finally eat. So, it’s an effective strain for treating HIV/AIDS patients, and cancer patients going through nausea-inducing chemotherapy and radiation treatments.

Some arthritis sufferers have also benefitted from consuming this strain of medical cannabis. It offers some serious anti-inflammatory effects, making it good for PMS, menstrual cramps, body cramps and muscle spasms. This cannabis strain is also a very effective treatment for ailments that cause debilitating, chronic pain, without the side effects of prescription drugs.

ADD, and ADHD patients see improvements in focus, without heavy-bodied feelings. So, they are better at focusing on tasks at hand after smoking Sour Diesel medical marijuana.

As a medical marijuana strain, it effectively treats those suffering from depression and stress. You’re left with a light head-high, and feelings of impactful elation. Sour D is a great choice if you suffer from depressive lows that lead to heavy-body exhaustion.

Taste And Aroma Of Sour Diesel

This marijuana strain comes with a pungent aroma that borderlines that of stinky diesel fuel. You may also notice hints of herbal notes and citrusy sour lemons. Although its smell may sound potently unpleasing, it’s actually quite pleasant.

Sour Diesel offers a citrus flavor that’s slightly bitter. Enjoy the savory flavors of its pungent notes of tropical fruitiness. Your palette will detect notes of sourness, earthiness and of course a touch of diesel fuel. Although it may sound harsh, this strain delivers a smooth taste, complimented by a soothing aftertaste.

Be the first to review “Sour Diesel (fem)” Cancel reply