The LSD strain of marijuana delivers a light-minded, heavy-body high. This marijuana will move you to sit yourself down and intensely enjoy the feelings of euphoria that it brings. You’ll discover multiple stages of high with this hybrid strain with its makeup of 45% indica and 55% sativa.

The LSD strain of marijuana delivers a light-minded, heavy-body high. This marijuana will move you to sit yourself down and intensely enjoy the feelings of euphoria that it brings. You’ll discover multiple stages of high with this hybrid strain with its makeup of 45% indica and 55% sativa.

This strain is a favorite of the medical marijuana community because of its high CBD levels of up to 5%. Its suggestive name comes from the psychedelic euphoria it delivers, which some say is much like an acid trip. The indica-dominant strain was created using parents super-strain Skunk #1 and Mazar.

The high is so intense it creates a heavy-body sensation. With 24% THC, it will really uplift you and put you in an upbeat, good mood. Because its THC and CBD levels are so high, this strain is not for the meek at heart or newbie smokers. Its effects are strong, and they set in hard and heavy. This award-winning hybrid smells sweet and tastes herbal and citrusy.

Origin Of The LSD Strain 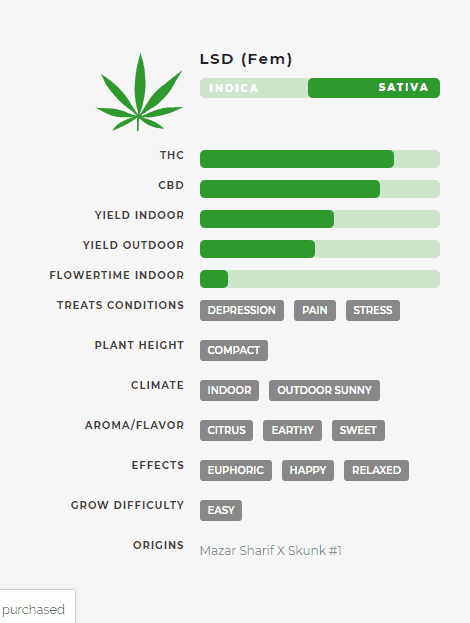 The Netherlands was the first to create LSD cannabis. It’s a cross between the Mazar strain of cannabis and Skunk #1, a legendary super-strain. Breeders fused these two strains together to create this pot that is world-famous for its intense high.

LSD was the name of the drug, also known as acid. Its euphoria can be so intense, some say it is similar to what many call an acid trip.

Effects of the LSD strain of cannabis

The body will feel heavy after that high. You’ll feel so relaxed that you’ll be physically stuck and slow.

LSD, as its name implies, is a potent strain of marijuana. The THC levels in LSD are up to 24%, which is a strong proof of this claim.

It also has some medicinal benefits, with its CBD levels ranging from 2% to 5%. You will feel more energetic both mentally and physically with this cannabis.

The LSD cannabis strain can give you a fast, euphoric high. You will feel happy and uplifted.

This strain is known to stimulate creativity and encourage users to use their imaginations. You will feel a warm, positive feeling and be surrounded by happy thoughts.

Due to the potency of LSD cannabis strain, you should only use it in moderate amounts. Some users reported feeling paranoid after smoking too much cannabis. Rare cases of anxiety or slight dizziness can also occur.

You may feel a little dry from this sativa-dominant strain. To keep hydrated after smoking LSD marijuana, drink plenty of fluids. Eye drops can also be used to treat itchy or dry eyes.

This bud can be strong even for experienced smokers. Amateur and new smokers alike should be cautious. The eventual couch lock won’t be surprising if they don’t feel the initial euphoria.

LSD Strains for Medical Use

LSD is very popular among medical marijuana dispensaries as well as other members of the medical cannabis community. It has some medicinal benefits due to its high CBD and high THC levels.

This cannabis strain is great for chronic stress because it has relaxing properties. This can also lead to mental stimulation, which helps manage anxiety and depression. It clears your mind and puts you in a high-body state.

You won’t have the anxiety and stress-producing thoughts you used to have. Instead, you will feel more relaxed and at ease in the present moment.

LSD can be beneficial for patients suffering from chronic, debilitating pain. It is powerful enough to cause pain. It is an effective painkiller that can be used against a variety of types of pain including, but not limited to:

This indica-dominant hybrid also has sativa qualities that help you energize. For patients with fatigue, medical cannabis dispensaries highly recommend this strain.

Taste And Aroma Of LSD Strain Of Marijuana

LSD marijuana has a pungent smell that is similar to fresh, earthy flowers. The aroma is skunky-sweet, slightly herbal, and pleasant to the senses.

It tastes exactly like what it smells – skunky, sweet and earthy with aftertunes. You can expect a citrus explosion when you smoke LSD cannabis. Some users describe it as a mix of sweet and sour flavors with a hint of earthy-lemon.

Although strong effects can be experienced, this strain is easy to grow. LSD marijuana strain is naturally resistant to most pests and parasites. Because it is so easy to grow, it also produces a lot of yields. It can be grown in almost any space. You will find that your plants are very short and require little maintenance.

LSD can either be grown outdoors or indoors. When the plants are fully grown and ready to be picked, indoor growers can harvest their crops in 9-10 weeks. Indoor cannabis can produce approximately 21 ounces per square meter.

If you are growing LSD outdoors, ensure that the area is protected. For maximum yield potential, this plant must have plenty of sunlight and heat. Harvesting and full-flowering will occur in mid-September. You can expect to harvest approximately 18 ounces worth of usable buds per plant.

Be the first to review “LSD (fem)” Cancel reply