Critical Mass is a marijuana strain with a loyal following of devoted consumers, especially when it comes to medical marijuana patients. Critical Mass is particularly known for having high levels of CBD, making it an excellent choice for those who want to relieve their symptoms and still be able to function.

Because of its hardiness, Critical Mass is a popular choice among growers. This plant is reliable and easy to grow. It also produces a good yield. The plant’s name, Critic Mass, is best explained when it is actually being grown. The buds have a high “critical mass”, which is a very dense and heavy plant.

Multiple breeders can cross Critical Mass. It is 80% Indica, but it also has a 20% Sativa presence. The CBD content of Critical Mass marijuana is very high, while the THC level is quite high at around 22 percent. This is why Critical Mass is so popular. It has a powerful punch that will take away your pains and stress, as well as your worries. 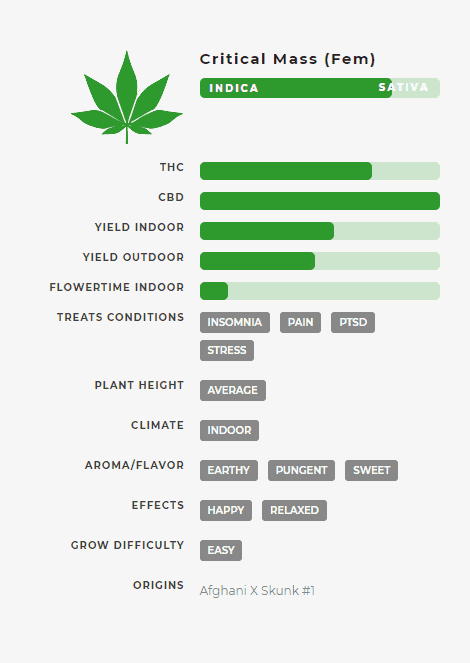 Critical Mass marijuana plants, as mentioned earlier, are relatively easy to grow and produce a high yield regardless of how they are treated.

Although they can grow to be quite large plants, their most notable feature is their huge, heavy buds. Sometimes, the buds can even break branches. This is a great problem!

The weight of the huge buds is the only problem. The branches might need external support to prevent them from snapping. Keep your eyes peeled and your senses sharp.

Indoor Critical Mass plants flower in 8-9 weeks. Outdoor plants thrive in similar climates to those found in the Mediterranean. Keep your plants out of frost as much as possible.

This strain is often compared with Big Bud, a Mr. Nice Seeds creation. However, it is well-known for its powerful and heavy-duty indica effects.

Critical Mass is well-known for its ability to relax users. Critical Mass is a great choice if you’re looking to relax in the evening without getting too comfortable on the couch. You will feel relaxed and able to relax your entire body.

Although Critical Mass’ effects are more body-focused than brain-centered, don’t be surprised to feel happy and euphoric. It’s why Critical Mass is so popular with tons of people.

It is possible to become dehydrated due to dry mouth. This is something you should know going in. However, it’s not difficult to do.

For patients with mood disorders or pain, Critical Mass can do wonders. It is able to relieve pain quickly and effectively. Its ability to relieve stress and other symptoms associated with chronic stress (such tight muscles or mood disorders) is second best. Critical Mass is a great option for people who struggle to sleep, regardless of whether it’s related to stress.

As well as inflammation, Critical Mass can also be used to treat depression and other mood disorders. As always, consult your doctor before self-medicating.

Using Critical Mass can help with the following conditions:

The aroma and taste of Critical Mass Strain

Critical Mass is well-known for its sweet, citrusy and skunky blend of fragrances. Many people also detect honey’s distinct scent. The mixture also contains a little bit of earthiness, which makes it a refreshing and delightful combination of scents. It’s invigorating, energizing and that’s just what it smells like!

Critical Mass’s taste is sweeter than its aroma. When you smoke Critical Mass, you will find all the sweet things you love, such as honey, fruit and sugar, mixed together into one delicious flavor. You’ll notice a stronger citrus and skunky flavor when you inhale. But, the sweetness will be complemented by an earthy element as you exhale. Critical Mass is loved by many people.

Be the first to review “Critical Mass (fem)” Cancel reply